We’re all familiar with October as being the month for Halloween. All month long, stores are awash in costumes, decorations, and candy. According to CNBC, Halloween captures 2.6% of total holiday spending. It ranks as the seventh in terms of holiday spending, behind Father’s Day and Easter. Some go so far as to claim that Halloween spending is even greater and that it actually ranks right behind Christmas in terms of dollars spent.

You’ll probably have to spend money on costumes and candy. But you don’t have to spend a lot on decorations. You can get much of that right from your own garden.

Pumpkins – probably the most obvious. But even here, you can be creative. Try growing one of the “warty” cultivars such as Warty Goblin or Knuckle Head. Carving one of these can give you a jack o’lantern that is extra scary. 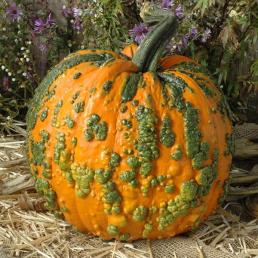 Cornstalks – a traditional Halloween decoration. But once again, there is room here for creativity. Grow a variety such as Glass Gem, which has colorful translucent kernels, or Black Aztec, an heirloom variety with black, gray-black, or bluish-black kernels. Many of these cultivars can do triple duty – pick some of the ears in the milk stages and use them as sweet corn; arrange them around your house and yard as decorations; and when Halloween is over, grind the kernels to make corn flour or use them intact for popping corn.

Gourds – gourds make excellent Halloween decorations by virtue of the variety of colorful fruits they produce. You can also use them for Thanksgiving decorations. And when it comes time to scrub off all that Halloween makeup, a sponge made from the Luffa gourd will do that very well. 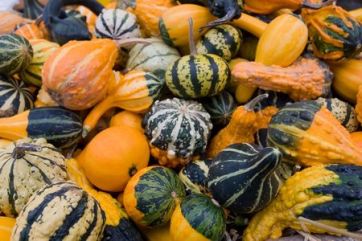 Miscellaneous – there are some non-edible plants that have a certain scare factor that makes them perfect for Halloween decorations. How about growing a Devil’s Tooth – a white fungus that secretes a blood-red juice from its tissues? Ghost Plant, Doll’s Eyes, and Black Bat Flower can add a touch of the macabre to your Halloween decorating.

So when it comes to Halloween decorations, don’t buy them. Grow them!