You get up early; work ‘til late
Watch moles and mice get overweight
They eat their dinners on a plate
From the hard work you have done.

From The Anti-Garden Song by Eric Kilburn

Sooner or later it happens to all of us. We exert a great deal of muscle to prepare, plant, and cultivate our gardens. All the while, visions of ripe juicy tomatoes are dancing in our heads. Then one day, we walk into our garden and discover, to our horror, that something has helped itself to the produce we labored so hard to grow. Sometimes we see the culprit in action – a rabbit munching on our lettuce; a squirrel running away with an ear of corn in its mouth; a groundhog emerging from the soil to steal a carrot or two; the parade of horrors goes on. At this point we become consumed with a fiery desire to wring their tiny necks or to blast them into confetti.

Believe me, I understand. Three out of the last four years, squirrels have stolen my corn and left me with nothing. I’m as human as the next gardener, and I, too, have been guilty of harboring the urge to commit rodenticide. However, I’m asking everyone to unclench their fists, put down the shotgun, and extend a little mercy.

These animals are not out to steal your veggies for the sole purpose of getting your dander up. They did not wake up in the morning with the specific intent to make a raid on your garden just to spite you. No. These animals want what we all want – good healthy food so that they can survive and thrive. And when they are hungry and see food, they’re going to take it, whether its acorns in the forest or tomatoes in your garden. But if they happen to encounter an angry gardener while foraging for a meal, they may very well pay for it with their lives.

I don’t like losing my harvest to invading critters any more than you do. But these invading critters are all God’s creatures and they’re as deserving of life as you or I. They don’t deserve to be cut down simply for eating. Worse – that rabbit that you’ve shot may have been a mama rabbit out foraging for her young. Killing her will leave a whole nest of babies to slowly starve to death. No creature deserves such a fate.

Let me repeat: Animals that steal from our gardens do not deserve the death penalty. On the other hand, we do not have to aid and abet their thievery. Instead of executing them for their crime, we can stop them from committing that crime in the first place. How? Well, there are a variety of ways to accomplish this.

Odors – Animals have a sense of smell that’s hundreds of times stronger than ours. So if something smells bad to us, you can just imagine how bad it must be to the animal. We can use this to our advantage and spray our gardens and the plants with odiferous substances such as garlic and rotten eggs (the two main substances in products such as Bonide Liquid Fence or Repels All). Capsicum, the substance that gives hot peppers their fire can be sprayed or sprinkled on your plants. The odor alone should drive them away, and if the animal should foolishly eat a fruit or vegetable so treated – well, just imagine how you would feel biting into a habanero pepper. 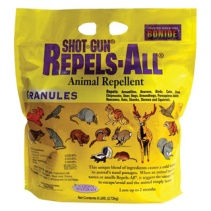 Scare tactics – Loud noises, predator urine, plastic figurines of owls and snakes, scare lines, and devices that automatically detect intruders and respond with a jet of water are all ways to give a rabbit or deer the feeling that your garden is not a safe place and that they should move on. 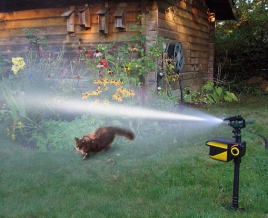 Bribery – In the words of Porfirio Díaz, “A dog with a bone in its mouth neither kills nor steals.” So put out some corn for the squirrels. Grow a patch of clover and alfalfa for the rabbits. Though not a guaranteed solution, theoretically, if an animal is full from eating something else, it has less of a reason to treat your garden as its food store. 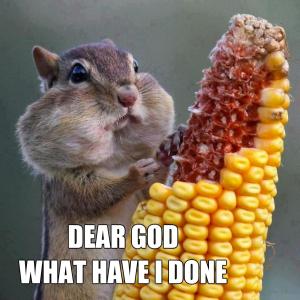 The animals of this earth have successfully foraged for food long before we came around, and they’ll continue to do so with or without us. So blocking them or repelling them from your garden won’t starve them. But if they can’t get into your garden, then you won’t be harboring murderous thoughts – or acting on them. And we can all peacefully co-exist. Sounds like a winning situation to me!

So block them, repel them, scare them, or bribe them. If you successfully accomplish one of the former, you won’t need to off them.

It was Friday morning, June 27th, 2014, and I was getting ready to hit the road for a wonderful weekend at that year’s Indiana Fiddlers Gathering in Battle Ground, Indiana. I was looking forward to a weekend of great music, late night jamming, and active participation – I would be leading their Children’s Concert and teaching a workshop.

As I was packing the last few remaining items into my car, the phone rang. It was my friend Debb calling to say hi. As we chatted, I mentioned to her that in a few minutes, I would be Indiana-bound.

“Where do you find the motivation,” she asked me.

Hmmm. I never really thought that going to a folk festival was something I had to be motivated to do. But I suppose there has to be something that compels me to hit the road and drive for 3-4 hours to spend the weekend on a former battlefield in a small town in central northern Indiana. I was in a hurry to be on my way, so I didn’t really have time to give her a very good answer. But I’ve had a couple of months to ponder that question, so Debb, if you’re reading this, I’ll tell you exactly where I find the motivation.

I’m motivated by hearing the music I love in a beautiful outdoor setting. There’s just something special about listening to string band, bluegrass, Celtic, and other forms of traditional folk music in an open grassy area surrounded by trees. 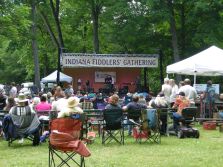 I’m motivated by the welcoming smiles, greetings and hugs from people who are glad to see me. When I’m at Fiddlers Gathering, I’m truly “back home again in Indiana.”

I’m motivated by the smiles and laughter of the families for which I perform.

I’m motivated by jamming into the wee hours of the morning with people who like the same kind of music I do. Here in the Chicago suburbs, there aren’t too many people who enjoy, much less listen to the music I love. But they are present in abundance at the Indiana Fiddlers Gathering.

I’m motivated by high-tailing it out of town for a few days and getting away from the daily grind.

I’m motivated by the joy of sharing my musical skill and knowledge with the people who come to my workshops.

It’s for all of these reasons that I’ve been motivated to attend the Indiana Fiddlers Gathering for the last twelve years and why I’ll continue to attend as long as I’m able.