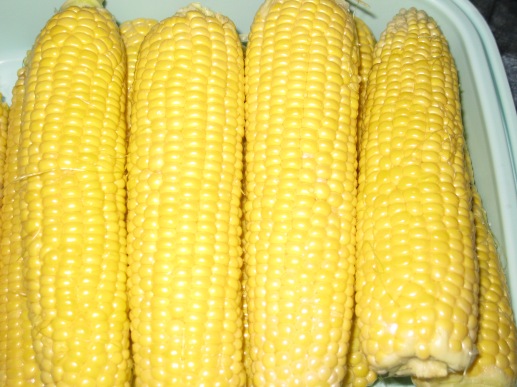 Sweet corn. It just wouldn’t be summer without that roasted or boiled buttery sweet summer staple of a thousand picnics and family gatherings. But have you ever wondered what it is that makes sweet corn sweet, and how it differs from other kinds of corn?

Sweet corn is corn that is bred for sugary sweetness and harvested when the kernels are immature. As a result the interior of the kernel contains sugar instead of starch, giving the product a sweet taste. Hence, the name. But did you know, that even among sweet corn, there are different genotypes? Allow me to elaborate.

su or Sugary — This is the classic sweet corn. The kernels contain modest amounts of sugar in them which gives them a combination flavor of sugar and corn. When harvested, the sugar in su corn rapidly converts to starch, which decreases the sweetness. That’s why many sweet corn aficionados claim that the best way to cook sweet corn is to boil the water, run out into the garden, pick and shuck the corn, run back into the house, and toss it into the boiling water. This, they claim, gives the maximum amount of sweetness. Golden Bantam is an example of an su sweet corn.

se or Sugar Enhanced — se corn has higher levels of sugar in the kernel than su corn. su corn still rapidly converts to starch upon harvest, but it will stay sweet longer that se corn because of the elevated level of sugar. The kernel walls of se corn also are more tender than those of su corn, which further improves the eating quality. se varieties are also hybrids, so you cannot save the seeds for next year’s planting. Examples of se cultivars include Kandy Corn, Bodacious, and Silver Queen.

sh2, shrunken 2, or Supersweet — The amount of sugar in the endosperm of sh2 corn is even higher than that of su or se corn. The higher levels of sugar and lack of starch gives the seeds a wrinkled or shrunken appearance, hence the name. Conversion of sugar to starch is even slower than in su and se corn, so there’s a longer window between harvest and preparation. sh2 corn germinates poorly or not at all in cold wet soil. sh2 varieties must also be isolated from su and se corn; cross pollination with sh2 can ruin their flavor and quality. And like se corn, they are hybrids, so the seed cannot be saved for the following year’s planting. Examples of sh2 cultivars include Early Xtra-Sweet, Northern Xtra Sweet, and Illini Xtra Sweet.

So which variety of sweet corn is right for you? Once again, this goes back to the planning we discussed in my last blog post. Do you harvest your corn and cook it later? If so, then I recommend one of the se or sh2 varieties. If you believe in roasting or boiling your corn seconds after harvest, then try one of the su varieties.